Probably upgrading my joystick against my will in near future

Just got the etsy mod for my thrustmaster hotas recently which I replaced because of a twist issue and it’s barely broken in before I start having roll issues. I just got the joystick/throttle combo this year and heard Jay saying at the yearly meeting how it has a twist issue that cames up in less than a year so I’m not investing any money in another one. Was planning on getting a Gladiator NXT EVO ‘Space Combat Edition’ with matching throttle. Any suggestions on if it’s worth getting the premium versions over the standard.

Also anyone use these who have a control scheme they are willing to share?

FYI - Thrustmaster sucks ass.
Pretty sure that’s a fact in the Library of Congress.

If you’re going with the OMNI on the throttle side (highly recommended) I believe it only comes in the premium stick version. IMO going premium on the flight stick side is worth it. They’ll match, the push/pull trigger is handy and useful (I use mine for missile mode/firing missiles) and if you aren’t using the analog thumb stick for anything you have the option to swap it for a hat switch.

I recommend Frakk’s suggestion because that is what I would do if I had to do all over again and of course, you can not go wrong with Virpil. Virpil also makes a stick similar to Omni, technically a stick extension, but you are going to pay more. 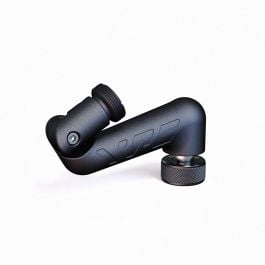 You still have to get the base and stick, so don’t get too excited for $70 … lol

Any advantages to using the Virpil Z-Extension?
One minus I can guess is that you wouldn’t benefit from the Omni’s (few) buttons on the base?

I didn’t really have the money for any of this, but I’m not buying a third thrustmaster, and didn’t want a gimped stick. I knew the throttle was premium but was hoping to save the $30 on the stick. But rather pay once than twice. Virpil is just to much to spend on.

The X55 may be the trick then?
@CrueOndanet got thoughts?

X-56 has some really good reviews, and a lower cost than the higher-end offerings.

Eh, don’t really liike the look of the x56 and while I would save like half assuming no shipping, I want to spend the money and get a setup I’ll use until Star Citizen is complete. LOL. Ok at least for a few years. If I got to spend any money, want to make it count. So who has it for a stick and throttle?

Everything else is a cost/feature compromise. X52/X56 is the only thing I’d recommend below that price point and stick feel/quality are in separate universes (which I lived with for years myself). Totally workable, especially outside of fighters, but the sticks are light years apart in smoothness and precision and running strafe on a thumb stick doesn’t hold a candle to having dual stick-like strafe fidelity with the OMNI.

So the problem is the twist sensor in the joystick, correct? How much trouble would it be just swapping out the joystick for now? Probably more than it would be worth, since you’d either has to use two different joystick software and still probably wouldn’t me able to be able to setup a mod key that covers both devices.

Again, who all uses the Gladiator joystick? Trying to figure out how I would move the controls over from the layout on the thrustmaster. And does using a joystick at a slant for a throttle work well.

I’ve used the Thrustmaster throttle with the VKB Gladiator joystick combo for more than a year. Works just fine. Having said that, I don’t use joystick softwares, I just use the in-game keybinds. Nor do I use mod keys.

The primary problem is they refuse to change the mold for the little plastic tab that “holds” the pot in place inside the grip. It’s too long. When you rest your hand on the stick that tab presses into the pot and over time it damages it. If you catch it early and you’re brave, you can disassemble the stick and clip about 2mm off that tab and the problem will normally go away. Eventually it will cause enough damage to the pot itself that clipping the tab won’t fix it.

I fixed two sticks this way and talked a member through the process once. His problem returned. Mine still work but I wanted to get away from dual T16000’s to a HOTAS so I went with the X56. Then I got tired of the terrible feeling X56 stick and went all in for a VKB Gunfighter MkIII but continued to use the X56 throttle. Then I got the OMNI.

I tried opening up a joystick and fixing the issue but quickly discovered I didn’t have the dexterity and gumption anymore trying to put it back together with my MS. It was easier just buying a whole new hotas set up. Of course if I had known how quickly a new one would go bad I would have gone a different route.

Went ahead and got the joystick. Got a little money doing web program work and I could’t resist. Will see how long the throttle lasts.

I have the Z-Extension. I absolutely love it! It is more of an intuitive angle for strafing Up/Down because you are literally now twisting up / down instead of left/right and getting up/down.

I get the joystick tomorrow. Yay!!! As for the throttle, I’m sticking with my old one for money reasons.

One downside so far. The joystick/control numbers have changed twice so I have to go back and redo all of them. First time was probably because I made hat switch a virtual mouse and the second time might be because I deleted the original joystick software which I didn’t think I needed. So probably both my fault.

But any suggestions on reducing the odds of this happening in the future or perminately assigning controller numbers? I check in microsoft’s controler panel and they are always in the same order and use the same USB port.