With the Intel/Raven bundle out now, I thought it worthwhile to have a thread as basically a clearing house of info on the 900P and a technical discussion of why someone would want one (besides the shiny virtual ship of course). If really want the Sabre that badly, just sell the card later. It will probably cost less in the end than on the grey market that way.

First, Benchmarks. I hear many off-the-hip statements like 7 time faster than “insert SSD” without a lot of context to how that is known. The speed you get is greatly dependent on how the data is read and what that data is. An averaged benchmark doesn’t tell you everything, and neither does a single one at which a particular drive excels (such as 4K random reads). I’ll admit that in benchmarks, the 900P is definitely in the lead. Is it worth twice the money though? It kind of depends on what your needs are. The one place it absolutely stomps all the others is 4K random reads. The question for me what what proportion of disk access does that account for on the average gaming system. Lastly here is a 3 year old article I found that seems related, and may shed light on the subject.

Second, just how much speed do you need, really? When the NVMe drives first hit the market, the argument was made that the average user with average use wouldn’t notice the difference, that conventional SSDs were already fast enough in most cases. I think the argument was fair, and should probably be asked today. Would you even notice the difference between a 900P and a Samsung 960 Pro? If you are rendering large amounts of data or something equally demanding, then any speed boost can be important. But gaming, I have serious doubts.

There are similar speed drives in the M.2 form factor that cost 1/2 as much. Wait to see what the codes are going for on eBay.

Wasn’t really post for myself so much as all the others who were discussing it in Mumble over the past few days. Just trying to get all the info in one place.

For now its moot anyway since they are sold out for now.

To me the Intel 900p SSD are well worth their value. My usage of them is not in a PC but in a homebuild server.
The reduction of the latency and the very high count of writes (10 Disk Writes per Day/DWPD) make it a perfect candidate for Caching drives. The 3D Xpoint architecture also allows a lot more parallel queue and cores to access the SSD.
https://ark.intel.com/products/123626/Intel-Optane-SSD-900P-Series-480GB-12-Height-PCIe-x4-20nm-3D-Xpoint

I bought four of them, and used the first coupon code for myself (it’s actually the reason I’m now on Star Citizen), and resold the three other coupons on ebay. 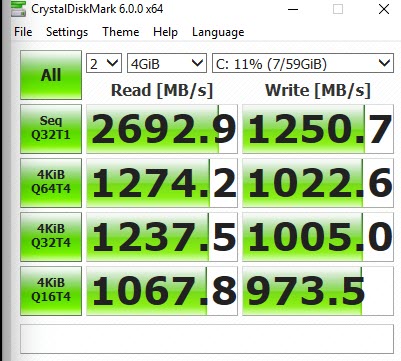 After all the discussion of the P900 and NVMe drives with regard to Star Citizen 3.0 I decided to do some testing of my own. Keep in mind this only shows my experience and is subject to issues the server might have had at the time.

In my case I have the following:

I alternated the game running on each drive as well the swap file, resulting in 4 combinations. For each combo, I launched the game and joined on the same server that I had a friended member in the whole time. As best as they could tell, the server was running consistent the entire time.

In each case I tried to do the same things (wake up, go down to terminals, spawn a ship and walk to it, around 5 minutes in game each time). I was monitoring FPS using the console command “r_displayinfo 3”. In all cases I was averaging around 20-22 fps, not as high as I usually get so is probably due to the server i was on. On a good server, even populated, I can get closer to 30fps on average.

I could upload video but it would really be a waste of time and bandwidth. In comparing the 4 videos there is no noticeable improvement from running on the faster SSD, and if anything there might have had around 1-2 fps more when I was running all on the 850 EVO. This leads me to believe that fluctuations in server performance (or from a few players joining/leaving) is greater than any effect a faster SSD may have.

Another possibility is my system specs simply may not be great enough and are a choke point obscuring the difference. Perhaps an i7-7700 or 8700 with 32GB of RAM might better show a performance benefit in SC from a faster SSD.

If anyone would like to do a compare like this on a more capable system, I’d love to see it.

i5/7 65xx+, 75xx+ or 85xx+, plus DDR4 ram seem to have the biggest impact on FPS. Older Intel CPU’s and AMD CPU seem to suffer more lag on the same server that those listed above.

That and making sure you have at least 16GB of ram.