What is the purpose of hangars? It appears they have no use. I saw on youtube that you used to be able to put your ships and stuff in them, but no more?

Hey, you can go in there and view your ships and what not.
I believe the original plan was that you’d rent a hangar at a planet. moon or city and that’d be your main location / home.
It must be very complicated to implement and I don’t know if it’s been totally abandoned but it’s most likely in the works for when they’ve got persistence.
Someone on here will know more and answer more clearly though. I do believe that the hangar size will matter once the game is finished as it will likely affect rent price, ship size, storage area and how many ships/ vehicles you can have. Personally I don’t ever plan on having more than two ships and I’m happy with having no bigger than the current ‘medium’ size. So areoview seems quite suitable.
Depends on what you want and how it evolves though.

Yes. All of your decorations and other junk could be placed in your hangars. You could also place your ships in them and do system/weapon changes there.

But they’ve been broken for some time. Think last time I tried to look in was was 18 months ago.

Thanks for the replies. I think at some point they will make it so that you will have a “home” planet or station and whatever hangars you own will be where your normally park. For instance I normally operate out of Area 18, and I noticed when I come into land, I always get the same spot. Of course it is in a narrow area that’s not easy to get too; but why would I expect a nice flat easily attainable spot. LOL. I’m really liking this game

I hope something like that becomes a home like base for our characters in the future. I really don’t care enough to add it in now, delaying the game further. But after gold release, that would be cool!

I remember reading awhile back that when the game is finally released to Beta or full release, we will have the choice of five possible locations in which to “start” in SC following the lore of being in Squadron 42 and our hangar will be our main base of operations for storage, ships, etc. until we build an actual outpost with land purchased.

One of the early backer rewards was/is a free hangar on your starting planet.

My assumption from this is that anyone that somehow doesn’t qualify for that would have to buy or rent a hangar to actually have their own, permanent hangar taking up space on a developed planet, or possibly even pay for storage of ships if you don’t acquire hangar/storage space somewhere.

I did read in a Reddit that it might change so that everyone gets some sort of free hangar space on their starting planet (because they want to encourage people to own fleets), but that the early backers with this VIP perk will be able to have free hangars in multiple locations. Regardless of the current plans, it could change again several times before release. 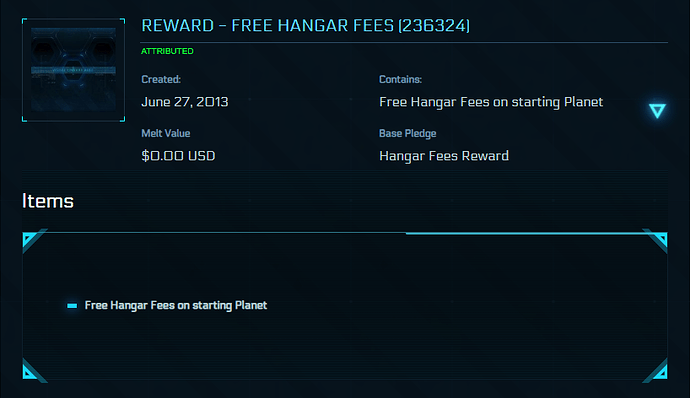 At present, the hangars serve no purpose except to let you place and view your ships without getting pad-rammed. In the past, they also let you view ships that were “hangar ready”, even though you couldn’t yet fly them, though the current ship pipeline doesn’t produce ships in a hangar-ready status. My understanding of CIG’s plans for this system is that we will eventually have hangars linked into the PU so that you can store ships, spare weapons and cargo (and anything else you happen to find in the 'verse) in them. Probably CIG is waiting on server meshing to make that possible, as at present items and ships in the PU are somewhat less permanent than intended, and it hardly makes sense to have the relatively isolated hangars located on the same server that runs Port Olisar and all the shenanigans that happen there. Hangars were also intended initially to be a place where you could place a ‘workbench’ on which to modify your ingame items and twaek/overclock their performance, but the later introduction of the Endeavor research ship made the plan around that mechanic unclear. I believe current speculation is that you’ll be able to tweak FPS items at a workbench, but ship items will require an Endeavor’s research lab. In any case, Hangars don’t currently have much to offer the 'Verse and none of their planned mechanics seems to be near on the roadmap, so I think we can expect it to be quite a while before we see any significant changes here.

Also, I believe (just my opinion, no reference for this) that once hangars get implemented into the game, as in there are places that have hangars to rent/own, you’ll probably be required to take your ships to the hangar where a specific ship item is stored before you’ll be able to equip that item on that ship.

No more global inventory, where everything is accessible from everywhere. You’ll only be able to use/equip an item at the place where it exists in the 'Verse.