So, ADI people! What’s your favorite ship and why?

I like the M2 because of the crew of three, armour lockers, ability to carry a vehicle aswell as a ship (specifically the razor as I’m very excited for Stealth mechanics). I imagine going on missions within populated systems and using the M2 as a mobile base for the three crew.
I get that there’s A LOT of issues with my phantasy and that practicality of this ship atm but it’s best we’ve got atm for this role and the crew size so I’m going with it…
Did I mention it has showers??

Second the M2, heh. Know it’s more C-5 than anything but reminds me of the C-130J’s in a nostalgic kinda way. Think it’ll be a lot of fun and multipurpose once we get more stuff in the game… maybe not as multipurpose as the MSR, but it can sure haul a lot.

I really do not have a favorite ship, I like my current fleet including loaners and each has their specialty.

Nomad, there is just something about it that speaks to me. It’s a little RV in spaceship form, complete with a kitchen, bed, bathroom, and the ability to hold tailgate parties in the trunk haha.

Like Teufelhunden, I have several but no clear winner. Tho I do have some preferred ships;
Aegis Avenger Titan Renegade - nice little ship for taking nice little trips
Aegis Sabre - so quick, nice ordinance, twin-engines and stealthy
Aegis Vanguard Harbinger - has proved itself a very resilient and capable fighter
Anvil Carrack - a nice bulletproof ship for recon work
Anvil F7C Hornet Wildfire - I love that boat, I don’t use it enough
Anvil Valkyrie - an able transport and insertion platform
Argo MOLE Carbon - because mining rocks!
Crusader C2 - a very able transport
Crusader MSR - a nice little transport
Drake Cutlass Black - a most able utility vehicle, insertion platform, good visibility,
Drake Cutlass Red - for obvious reasons (+ it looks way cool with all the lights on)
Kruger P72 Archimedes - the ship I most use to take pictures and shoot video
MISC Prospector - the most zen of personalized mining ships
Origin 600i - for when a want to immerse myself in beauty between departure and destination
Honourable Mentions:
Aegis Avenger Warlock - because the EMP works
Aegis Vanguard Sentinel - because it’s a stealthy heavy fighter
RSI Mantis - because nothing says love like reaching out and touching someone

This is a hard question for me to answer.

If I had to pick a single favorite though it would probably be the Crusader Mercury Star Runner.

Although an honorable mention is the Hawk. I want to love it so badly. But the only way I would bring it back into my fleet is if they gave the option to swap the emp for a missile rack, or a size 3 gun.

I think we should judge small, med and big ships seperately as they’re hard to compare.
Among big ships carrack is very well thought through and balanced. Big cockpit with wide view andle, pretty big cargo hold, modularity, drone stations and cartography map for exploration, huge 3d radar on deck, repair shop, captain’s and crew quarters, recreation space, armor and weapon storage, hangar for a small ship, docking collars and a medbay for respawn. Most ships don’t have half of those things). So in terms of functionality and effective space utilization it is the best ship right now.
And on the other side of this we have starfarer. As a first big ship in the game it has the worst space utilization and in dire need of rework. But I like it anyways

As for the medium ship - freelancer is my favorite. Loved the original game and that ship is what made me jump into SC).
As for the small ship, I like MPUV. I know it’s not meant for quantum jumps, but I just love it’s design and love the idea of small passenger rides between big ships or crafting mats delivery to different stations.

Loving the harbinger recently. It’s tanky and looks great doing it. I’ve got a Perseus on the shelf that I think will be my favorite in the SC universe. If I know CIG it’ll probably end up being about 10-15m bigger by release, but I love the idea that a smaller ship can punch way above its weight class. Brings back memories of being a Naga pilot in Eve.

Hey Jones, what loadout do you run on your harbinger? Ive been trying mine but i kind of hate jt.it

My favorite ship is the Prospector 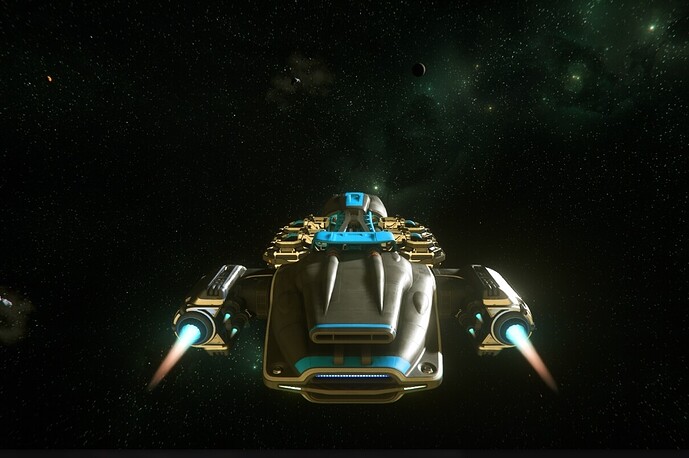 I have one and I prefer it over the ROC. I use the ROC to change any monotony.

Let’s see, this is a tough one, as some just are not even comparable to others due to designed function. So of course I have a few favourites like everyone else

My over all favourite though has to be my 315P. It looks good, decent weapons and shields so it can survive some light combat. Looks amazing. Fast in atmo which is great to get around. Beautiful looking ship. Has a decent cargo capacity for a small ship. Did I mention I love how it looks?

Runner up is the 600i. For pretty much the same reasons