I have a tiny question about melting game packs and their buyback. Since I don’t have that much experience with that issue, I thought that it would be wiser to ask that question to those people, that have some more experience with the topic.

Logically, I would like to melt my game pack and revive the original mustang game pack via a buy back token (Leaving the later in hangar)

So my question to the melting-professionals here is: Are there any hidden traps or undesired issues I have to expect when working with melting and buyback?

I’m not sure the exact steps you plan to take, so a little more detail would be helpful.

Ok so a couple of notes.

You can also leave Squadron 42 off for a bit until the next round of personal Star Citizen funding. That is what I did but plan to get it back before the end of the year. But yes, make sure to have the PU or you will be locked out of Alpha.

On a side note, they should change the November sale to the Holiday sale, and last to November … lol

I will add this little bit of info…

Don’t melt your game package yet. Wait for the end of November sales (usually the week of thanksgiving) when everything goes on sale, then melt your game package and don’t un-melt it. Instead replace it outright with a November sale game package. Not only will you be able to get the game package cheaper, but it will come with years worth of insurance vs only 3 month insurance. You can also add SQ42 as a discount add-on. This will give you extra in store credit to put towards getting other standalone ships or cheaper LTI ships that you can CCU into the ships you want. 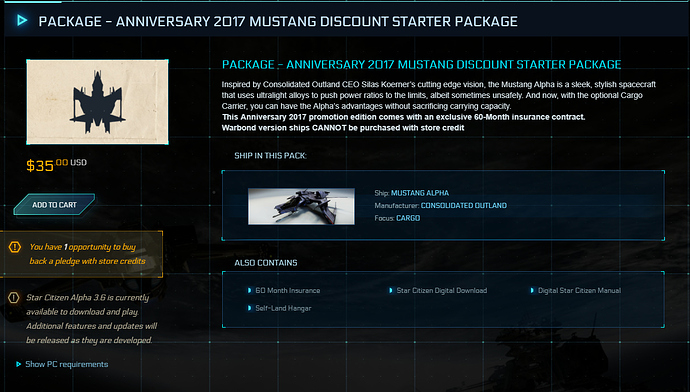 thank you for the valuable replies and comments…

In fact, Mektor, it was really my intention to overhaul my Starships in the anniversary sale.

Additionally, I think about getting another star citizen pack for my account. As far as I have read, this will be a requirement for adding additional avatars to one´s account.

I joined Star Citizen in April 2016 with a SC/ SQ42 Pack, including a Mustang with 3 Months Insurance.

The Mustang was upgraded to a Cutlass Blackin in 2016, then to a Conny Andromeda, then a Conny Aquila and finally to Genesis Starliner in November 2017.

So my biggest ship ist still bound to my account and has a rather “lame” insurance.

That is the reason why I think about melting it and get a Stand-alone-Genesis Anniversary Sale Edition via store points (if that is possible during anniversary sale. The ships you purchase here have a longer insurance period).

I hope I catched most questions.

If not, just feel free to ask

So come november you can melt the starliner, get your credits back, buy back a game package (or two), and you can either buy a standalone starliner, OR you can buy a cheaper concept ship that has LTI already with cash, and then CCU it to the starliner via store credits. That keeps the ship transferrable, uses your store credits, and gives you LTI on the ship.

Between now and november there is almost guaranteed to be another LTI concept ship going on sale. Usually is a new ship on sale during the november sales as well.

I’m not so sure about SQ42 being a “cheap” addon though. As far as I’m aware it is currently a separate $45 purchase, I’m not seeing an add-on option. 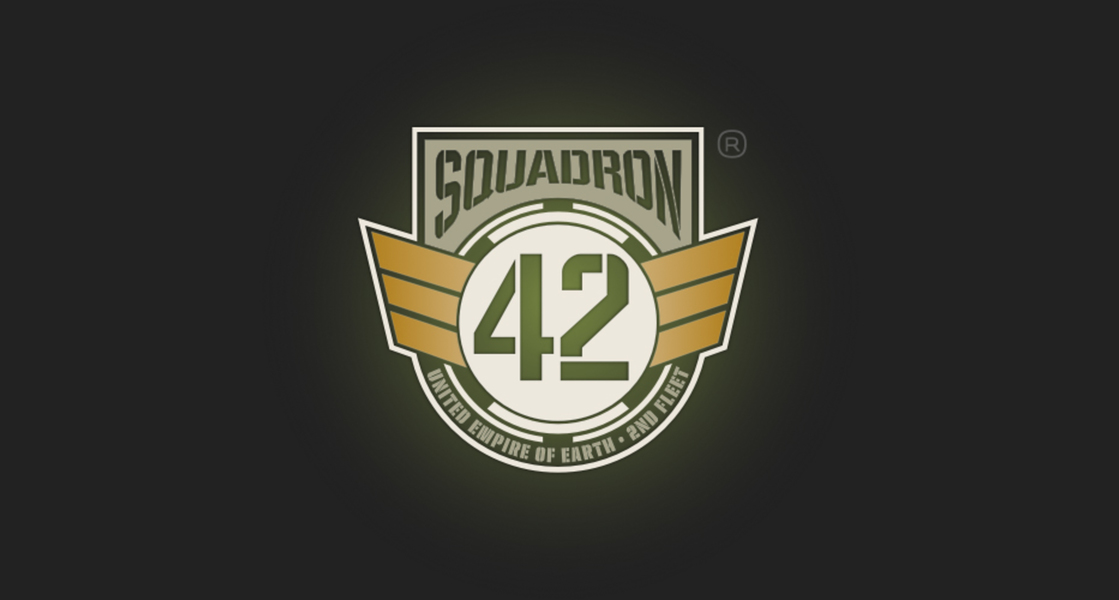 Roberts Space Industries is the official go-to website for all news about Star Citizen and Squadron 42. It also hosts the online store for game items and merch, as well as all the community tools used by our fans.


IMO, he may be better off buying back the original package and using the remaining melt money to CCU something he buys in November.

I also think people put too much value on the LTI and multi-year insurance. The ONLY difference between those is the monthly premium which is supposed to be a nominal UEC fee according to CIG. It doesn’t change its coverage or any deductibles you WILL be changed in-game when you claim once this is released. This might matter for those with huge fleets, but lets face it, that isn’t the majority of players. 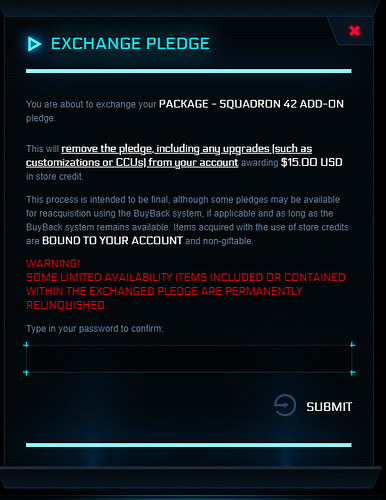 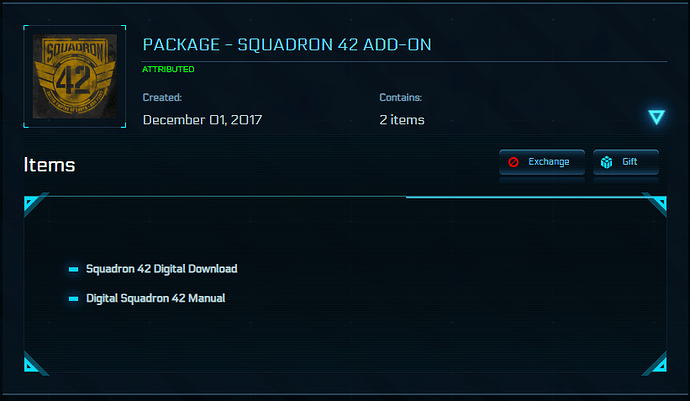 During anniversary sale if you buy a discount starter package they offer a discount SQ42 addon for an additional $15 making total pledge like $50 for your starter ship package with years of insurance + sq42 game package.

Cool. So it just comes down to what they offer in November and how much you value the no-premium insurance. At this point I’m not assuming anything on price or availability.