Got stuck in my Titans bed. Couldn’t get out, log out, or even hold backspace!

Finally get back into the game after reporting the bug, and see this as I walk out of my hab…

I’m fine… everything is fine… 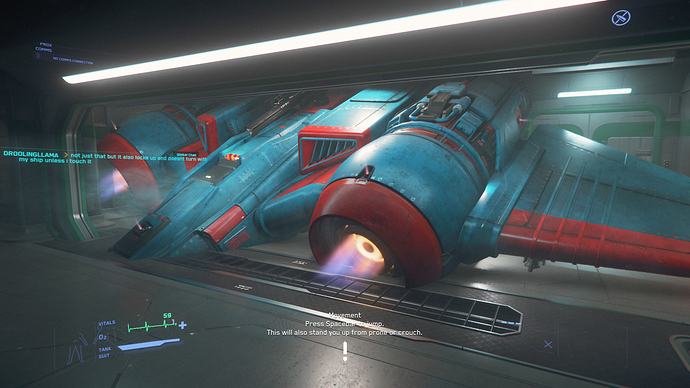 3.8.1 is brilliant! just wait till you try basically anything to do with FPS combat…you can’t shoot or kill ANYONE. desync is so bad that NPC’s are invulnerable, other players are invulnerable…yet NPC’s can still kill you. other players will just ignore you and laugh at you as you try to kill them and waste your ammo.

Have you seen the blue ball and navigation line when target for navigation is set. It’s way off. Total fail in programming and verification by the devs

I think the play experience right now is largely luck as to which server you hit. Couple nights ago I logged into a server with a lot like the above. In addition, I tried 3 Claim Jumper missions but no mission marker showed and nothing spawned when I arrived at the coordinate named in the mission. When I did find NPCs they were basically frozen in space.

Conversely, last night I logged in to a long stable session and was able to engage and kill multiple NPCs. Missions worked as expected.

Just saying don’t count one or two logins as indicative of the whole game state. Try changing regions or joining on different friends. Also there is still a bug involving bed-logout from 3.8.0 that can corrupt the user profile. The workaround is described here: https://support.robertsspaceindustries.com/hc/en-us/articles/360038342233-Error-30009-Disconnect-on-Loading

All I have been getting all week is this

What ship were you trying to pull?

Mustang alpha and freelancer. I fixed it with account reset.

Looks like they also added invisible bunk beds for guards

The NPC’s in station are so bad and there’s so many of them! I know they want to make it feel like a busy and populated environment but why not reduce the numbers by half, surely it will help make things more stable and still feel populated.