I noticed in my first interactions with Lorville in 3.13 that the game had become more likely to freeze and crash. I’ve studied it a little bit with the Task Manager performance graphs and have noticed the following:

In the end, if I read the displayed info right, the game demands at least 21G of RAM. On top of the 4 or so by latent processes, this means that 25G is required by the game to avoid lags caused by storing assets on disk. 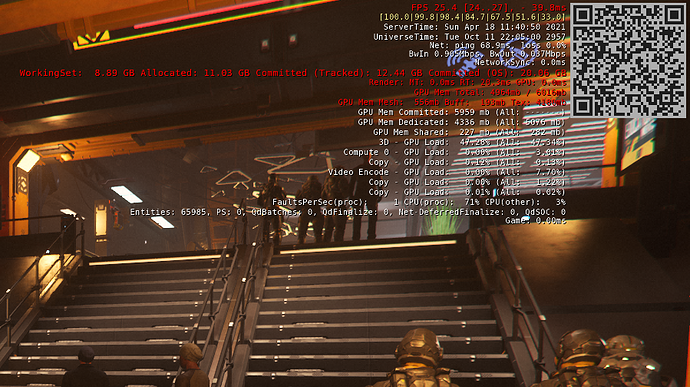 I should mention this is at the top graphics setting.

32GB is the new 8GB of memory. If you’re building a gaming rig today, you should be putting 32GB of memory in the system.

That’s very interesting motomataru. Thanks for posting. Not that JayC needs validation but I bought 32GB (2x16) for my new system when I quickly discovered one of the 16GB sticks was bad. Of course warranty wanted both sticks returned so I bought 2x8GB to use while they were gone. Now I have 48GB and no worries.

Also important to keep in mind: This software is not yet optimized very well and is bound to use up lots of extra resources.

Having this issue also. Its unplayable for me. I also have a GTX 1070 graphics card and 16GB RAM so can I just upgrade my RAM to get this game to work again? Been AWOL for about a year and now want to get back to mining!

Also just want to say that the game worked flawlessly last year for me, no issues